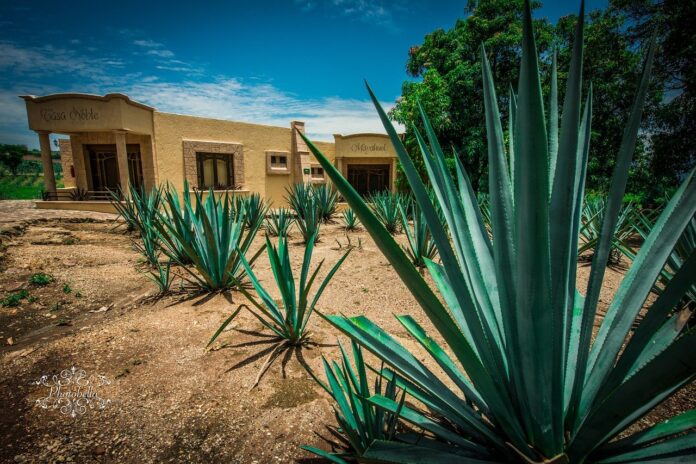 Tequila plant or Agave Tequila is one of the fastest-growing succulents, which produces bulky rosettes containing leaves that change color in various situations. It is also known as blue agave and is a member of the agave family. The plant is an important economic product of Mexico and Jalisco because of its role in the production of tequila.

Blue agave thrives in altitudes of about 5000 meters and prefers sandy and rich soils. Besides its large succulent, it also produces fleshy leaves that are spiky and can grow up to seven feet.

When the plant gets to five years of age, it sprouts a stalk, which can grow an extra 16 feet. After about 7 years, its rosettes will mature and produce a flower stalk of about 20 feet with up to 25 branches. It produces green flowers that have purple stamens appearing around summer. After the flowering stage, the rosette withers off, and the plant continues its life cycle.

Tequila is native to Mexico, specifically Jalisco and some part of Michoacan, Guanajuato, Nayarit, and Tamaulipas. It comes from a particular species of Agave tequilana known as Agave tequiliana “Weber Azul.” The species is a rapid grower with blue-grey leaves and big rosettes.

How to Grow Agave Tequila Plant

A single large agave is enough to form a sculptural focal point in any garden. There should be enough room for agave planted in a garden for people to walk to prevent brushing on the spiny tips.

Agave tequila is not a plant that requires special care. However, one needs to ensure the soil drains well with enough sunlight. As long as they are cultivated in the right environment, they require no special attention.

Agave Tequila needs full sun before they can spot though they will survive with a bit of shade. If you cultivate agave indoors, I will recommend using a bright window that allows ample sunlight inside.

Agaves will survive on any soil provided the drainage is good. However, they do well on sandy or rocky soil. You want to avoid poor drainage as it could cause root rot, which is not suitable for the plant.

When blue agave matures, they are resistant to drought. Make sure to water the plant lavishly when soil becomes dry and there is little to no rainfall. Also, during the early days of the plant, you should water it every four to five days and graduate to once a week watering depending on rainfall.

During the winter months, your agave will need water once a month. If your plant is in a container, it will require frequent watering compared to those not in a container.

Typically, you do not need to support your agave with fertilizer. This is because feeding triggers flowering, which should not happen too soon as the agave, dies after flowering. You might, however, give them a tiny amount of fertilizer for the first two years during spring.

Most tequila plants will not tolerate frost. As a result, they thrive mainly in the USDA growing zones 8 or 9. This plant thrives in low humidity because excessive humidity can cause crown rot.

Also, it can withstand temperatures getting a slow as 25F.

Like many succulent plants, tequila has shallow roots. This makes it easy to propagate them in a shallow container since they require minimal soil.

However, you want to make sure that the pot can hold the plant’s weight. Therefore, I will recommend a pot that drains well and is suited for succulents.

During summertime, you need to water it once a week and monthly in winter. However, do not water until the soil becomes excessively dry.

Ideally, you should repot your tequila plant using new soil every two years. However, watch out for when the root fills the pot. When this happens, use fresh soil and a new pot (larger than the previous one) to plant the agave.

The production of seeds from a tequila plant can take years. As a result, you will propagate them by offsets.

Generally, agaves hardly have issues with diseases and pests. The most common pest is the agave snout weevil. This insect can burrow into the center of the plant to lay eggs. Eventually, the plant will collapse because you will hardly notice it until it’s too late.

As a result, the best cause of action is to remove and dispose of the plant. This will help prevent the insect from affecting other plants. Watch out for spider mites as well.

Fungus fusarium and Erwinia trigger the disease, which causes the root, stem, and crown to rot.

The reproduction of the tequila plant can either be sexually or asexually. Farmers generally do not allow their plants to mature fully sexually before cutting the stalk to boost harvest. This stops the bats and other insects from pollinating the seeds.

You should cut off the stalk as soon as there is an inflorescence from the plant. With this, the plant directs its energy into the enlargement of the pina, not seeds and flowers. It is the runner that you will cut and plant.

To propagate agave, you will use the offset. On removing the offset from the main plant, leave them for a couple of days before planting. With this, the offset root dries out, preventing root rot that might kill the plant.

When planting, you should not bury them too deep to prevent stem rot as well. You will hardly get offsets from an indoor tequila plant, which makes them hard to propagate.

Tequila Agave can be cultivated indoors or outdoors. Whichever way, they need a suitable planting medium with excellent drainage. As long as the cultivation mix is designed and suited for succulents and cacti, you will have a healthy tequila agave.

You can have your substrate by combining perlite, coarse sand, and peat moss in the same proportion. Make sure to surround the plants with mulch in cooler months. It is possible to use chopped leaves to add nutrients to the soil as well. It will go a long way to add nourishment to the plant.

Tequila planted in potting soil does not need much fertilizer. You can add liquid fertilizer prepared for cacti and succulents once a month. The addition of fertilizer is not compulsory unless you notice stunted growth.

You can cultivate tequila agave in containers without serious issues. When small, they are terrific indoor plants since they don’t have the problem of root crowding. Once they outgrow their present pot, transplant it to a larger one.

Q: Can I make tequila from this plant?

Detailed Answer: the Agave tequila needs to be eight years old at least. In addition to tequila, you can make mescal and pulque, which are alcohol spirits manufactured in Mexico.

The brewing process of the agave tequila plant is not straightforward. This is because of the series of the process involved in the manufacture of alcoholic spirits.

Q: Can one make soap from the agave tequila plant?

Yes, one can make series of soap and cleaning products from the fiber and the pulp.

As a result, never consume the tequila plant, or it can affect your health. For people that want to consume an alcoholic drink, make sure you have the guidance of a professional. This is due to the complication involved in the process.

People that want to have varieties in their garden will do well with some agave tequila. They are easy to care for, affordable and require no special attention.

Succulents are great, and they will add color to your garden. In addition, the spiky leaves will go a long way to repel animals.