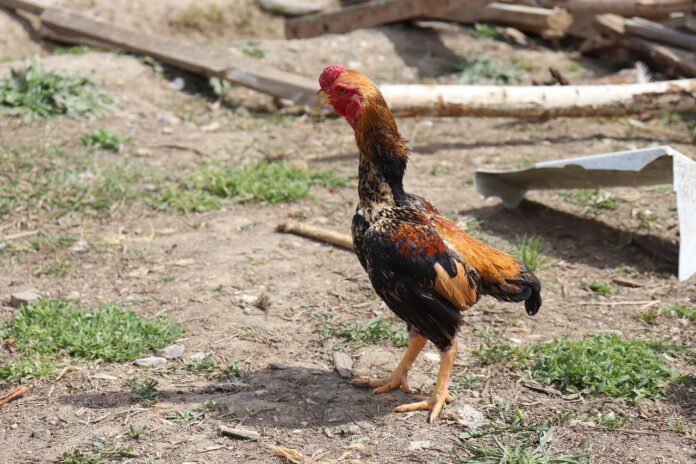 Shamo chicken is a breed popular in Japan that has a unique posture. It is mainly used for cockfighting and showbiz. You may find different varieties with different colorations. In this guide, we will help you understand the Shamo chicken by looking at history, appearance, feeding, and other features.

The Shamo chicken is an athletic bird breed used for games in Asia. It is said to have originated in Siam (Thailand). During the early 1600s Japanese Period known as the Edo Period, they were kept extensively and bred for their endurance and strength.

There have been successful selective breeding of Shamo chicken over the years. Shamo chicken is not only bread for cockfighting purposes but also their unique characteristics.

It has an outstanding posture and an amazing carcass quality. Here are the recognized varieties of Shamo Chicken;

‘Shamo’ is a word used to refer to game birds in Japan but it is also considered to be the altering of the name Siam. Siam is an original name in Thailand where many breeds of chicken were then shipped to Japan.

In the USA, Shamo chicken was introduced when World War 2 ended. It is allegedly said that the eggs were transported in a soldier’s pocket and then taken home to be hatched. Since then, the influence of Shamo chicken has grown in the US. It was recognized by the American Poultry Association in 1981.

Shamo Chickens are popularly known as a game chicken, but they are also the second tallest chicken after the Malay chicken. They are tall with the body carriage being nearly vertical. They can grow up to heights of 30 inches tall.

The feathers are stiff and closely held together on the body. The entire body may not be fully covered by the feathers. The shoulders are boned, broad, and muscular. The thighs muscles stand out the most.

A small trail that slopes towards the ground will be seen at the end of the upright posture. The earlobes and comb are bright red. Shamo chicken also has wattles that are red but may go missing or become smaller in other breeds.

Beaks and legs have yellow coloration and have a hardy covering. Most Shamo Chickens have eyes that have pearl color but can vary depending on the variety. The wings are short and strong often unseen as they sit closer to the body on the back.

The head features that help in identifying Shamo Chicken include;

Personality and Behavior of Shamo Chicken

Shamo chicken takes resemblance to Asil chicken in many characteristics. The chicken is often calm and easy to take care of. However, the Shamo roosters often get a bit too aggressive to each other.

They can also get aggressive towards other chickens. Baby chicks fighting is also a problem. Also, roosters have to be separated and kept from the other roosters. In some cases, roosters can fight to the death.

The Shamo chicken however can be tamed to behave appropriately. This has to be done at a young age to get things online. The Shamo hens are known to be good mothers by taking care of the eggs and the chicks.

The egg-laying rate in Shamo chicken is about 90 eggs a year. This is quite high compared to the other birds of the same kind. The eggs are light brown in color and medium-sized. The number of eggs can vary depending on the variety of the Shamo chicken.

Shamo hens are known to go broody and often make great mothers. However, their large body size poses a problem, especially during hatching. The Shamo hen can be clumsy and end up breaking the eggs. The solution is to try and make the living area less prone to accidents and comfortable.

It is, therefore, easier to incubate Shamo chicken eggs than relying on hens to hatch them. Egg-laying starts when they reach 5 months.

What Should Shamo Chickens be fed on?

The first food when you get your chicken home is growers mash. Shamo chicken has a high protein percentage, which is essential and also easy to be ingested as it is refined. Grower’s mash should be fed to them until they are 6 weeks old.

Chicken pellets can then be introduced which have about 16% protein. After around 18 weeks more nutrients will be needed to aid in egg production. Slowly introduce layers of mash to the diet. You can also supplement live foods like worms as a treat.

Shamo chickens need access to cool drinking water the whole day. The water should be cool as they prefer that according to some studies. Make sure it is easy for your chicken to reach food and water as they are small birds.

The water and feeds should also not be too close to the ground. This can make the water and food go bad easily because the chicken scratches dirt onto it. Also, provide grits all time to aid with producing eggs.

How Much is Enough?

Shamo chickens are quite large bird varieties and may eat between 140g and 200g each day. The average is 170g of which you can use as a starting point. You can adjust depending on how much your chicken consumes.

Food can be left in the feeder so that they can help themselves anytime. Or, you could try having a set mealtime at separate periods of the day. Allow them to forage on the outside for some bugs and grabs.

What Should Be Avoided

The main foods to avoid are beans and chocolate. Phytohemagglutinin in the beans can cause fatalities in Shamo chicken. Theobromine found in chocolate is known to cause heart issues in chickens.

Moldy food should be avoided as it contains harmful bacteria. This may make them unwell and even die. In the UK, it is an offense to feed chickens leftovers.

The Shamo chicken is known to be hardy bird species. There are no known health care issues however owners should be on the lookout for poultry mites. These are external parasites that are a nuisance to your chicken.

Poultry mites come into the coup by introducing infected birds to the flock. They can also be carried on shoes, clothes, wild birds, and also rodents. To prevent this, you have to keep a clean environment and quarantine the sick birds to prevent further transmission.

How Much Space Do I need to Keep Shamo Chicken?

As said earlier, Shamo Chicken is quite large and does not like being confined in small spaces. So, it should be 8 square feet minimum per mature bird that is in a coop. When in a run, it should be a minimum of 30 square feet per bird.

Good access to the outside will be appreciated thus preventing boredom. Shamo love being outside foraging in the soil for food. They do not fly much, thus you should not be worried about them flying away.

Will Shamo Mix with my Other Chickens?

Often Shamo chickens get along well with other chickens provided there is no aggressive male that causes the disorder. They will get along well as long as the spaces are confined for each breed. There should also be adequate room to allow for exploration and prevent boredom.

How Many Do I Need?

The absolute minimum required is 2 females to help start your flock. A flock of 5 is recommended to start an everlasting flock. You can provide one rooster to keep the reproduction going on.

The Shamo chicken is a good breed to tame as it demands little. You only have to provide the best food and enough space for them to give the best results. The unique physique is also something for you to brag about. Originally it was for cockfighting but has evolved to do other functions well too. So, go and get a flock for yourself.

How to Get Rid of Lizards

What Is Pink Cloud In Addiction Recovery Journey?

How to Get Rid of Lizards

What Is Pink Cloud In Addiction Recovery Journey?

How Does a Dishwasher Work