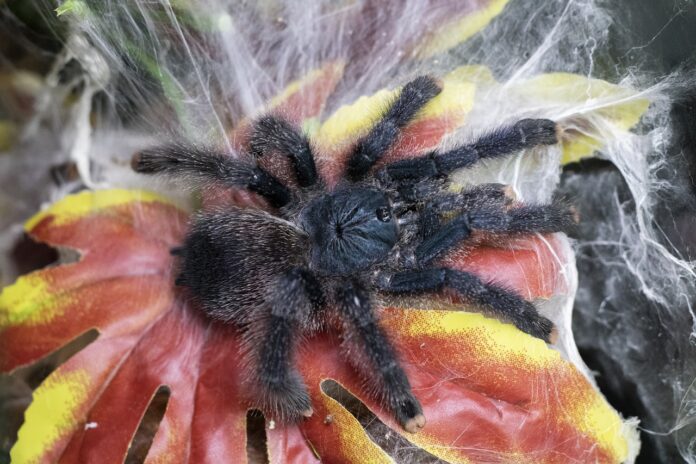 We all like to keep exotic pets and watch them grow. These rare pets increase our curiosity and give us an interesting hobby in the bargain. People keep several kinds of unusual pets in their homes. If you are looking for any such pets to keep, the Pink Toe Tarantula is best suited for you. Not only is it rare, but it is also a mysterious animal to have around.

The Pink toe Tarantula gets its name due to the pink-colored toes on otherwise black hairy legs. They are non-venomous to the new world dwellers as well. Most of the time their bite leads to rashes and mild allergies. In rare cases, people feel uncomfortable. This is one of the main reasons to have them as pets. They have a long life and need the least maintenance.

You can keep the Pink Toe Tarantula at your home. It takes a small setup and with little effort, you can house this mysterious-looking pet. If this is your first time with spiders, you will need to know a few things about them to begin with. We bring to you this definitive guide on the Pink Toe Tarantulas to help you domesticate them. The guide will be helpful to first-timers and experienced spider keepers.

The Pink Toe Tarantulas is an arboreal species. It climbs and lives on trees and higher places. They are a delicate and sensitive species. They get stressed quickly. When they feel threatened, they tend to leap, jump and run. In a dangerous situation, the Pink toe Tarantulas bite their aggressor. They also have a peculiar habit of spraying their poop on others.

These spiders are aggressive and have an unpredictable behavior. They will stay still for some time and start jumping or hopping the next instant. Even though the Pink Toe Tarantulas are aggressive, you can keep them at home. You need to build a suitable enclosure for them.

Why Keep The Pink Toe Tarantula At Your Home

You may wonder why you should consider the Pink Toe Tarantula at your home. Is there any benefit of having them as pets? Well, there are. We list below some of these advantages:

The Housing For Pink Toe Tarantulas

The housing for the Pink Toe Tarantulas is a key element in domesticating them. You don’t want your Tarantula enclosure to break down and find your pet moving around. At the same time, keep in mind that these creatures need enough space. So if you restrict them in a small enclosure, you will reduce their growth and lifespan.

You can use a fish tank or a plastic enclosure for this purpose. It can be a 10-gallon container or a 12”X12”X18” enclosure for a single spider. Since the tarantulas like to climb and stay on the upper reaches, make sure the enclosure has a good height. At the heights of their cage, they will spin webs and spend most of their time there themselves.

The Tarantula spiders like to stay on the top parts of their enclosure. So it is advisable to have a side or front opening for their compound. You can either adapt a fish tank for the purpose or buy a Tarantula enclosure for a pet shop. Ventilation is important for the Pink Toe Tarantulas. Fresh air keeps the enclosure free from molds and foul smell.

The Tarantulas don’t spend much of their time on the ground. So the substrate of the enclosure is not that important. You can either put fertilizer-free soil or peat moss to cover the bottom. You may also use vermiculite, coconut fiber, or peat moss in the lower part of the enclosure. Keep a lot of cork bark extending to the top and few live plants as well. You may also put in a few fake plants to liven up the enclosure. Keep the substrate shallow so that it is easier for you to clean it.

Since the Pink Toe Tarantulas do not spend much time on the ground, do not clutter it. The more you put on the substrate, the difficult it will be for your pet to hunt its prey. And of course, the more the clutter, the harder for you to clean the remains. You may yet put a few fixtures for the Tarantula to climb and hide when needed. A small cave or a few rocks should do the trick.

The Tarantulas don’t need any special lighting conditions. They don’t need a heating lamp or UV lighting. Simple illumination is good enough for them. At the same time be careful not to put your spider in direct sunlight. Since these are sensitive creatures, they will get fried in direct sunlight. Do not keep the spider enclosure near any window. The direct heat and light will harm the Tarantula’s health.

The Pink Toe Tarantula is a tropical creature. Hence it needs a humid atmosphere. Maintain relative humidity at 75 to 85 % or higher. Low humidity can trouble your pet or even lead to its death. Tarantulas have difficulty in shredding due to low humidity. Use small-sized humidifiers and spray the enclosure with water. Remember not to spray water on the Pink toe Tarantula. It will irritate your pet. Measure the humidity of the enclosure using a hygrometer.

The Tarantulas need a constant water supply. Keep a water dish on the substrate. Embed it halfway through the substrate for stability. You can either use one medium-sized water dish or a few small-sized dishes. You can even install a water dish halfway on one of the cork barks. Change the water every few days and clean the dishes.

The Pink Toe Tarantulas are carnivores. They feed on small bugs and insects. They prefer live prey to dead ones. You can feed them with crickets, cockroaches, small-sized lizards, and frogs. You can leave their live prey inside their enclosure. Remember to remove any leftover food material 24 hours after. The decaying leftovers will otherwise create a foul smell. The Tarantulas use a process of stationization to catch their prey. They remain still until they have to attack their prey.

You can buy live tarantula food from the pet store or catch them in your garden. It is a good idea to first feed the crickets and cockroaches to fill them with nutrients. This will let you provide the maximal nutrition to your pet. You can even try releasing a few bugs and insects in their enclosure. The Pink Toe Tarantula will love to catch them on their web.

You need to feed juvenile Pink Toe Tarantula twice a week and the adult spider once a week. The Tarantulas do not eat when they are shedding their exoskeleton. There have been no reports on problems related to overfeeding the spiders. So don’t worry about the diet quantity. At times, the Tarantulas go without feeding over a long length of time. It is ok as long as they don’t shed a lot of weight.

Molting is a common phenomenon in invertebrates. The Pink Toe Tarantula shreds its skin and grows bigger. The spiders complete their molting within their hiding place. You will find their shredded skin on the substrate a few days after the process is over. Before the molting process, the Pink Toe Tarantulas refuse food and become lethargic. They retire into seclusion and are less visible.

Molting in spiders is a lengthy process. Though the actual molting takes a few hours, the new exoskeleton so formed takes time to harden. The spider resumes normal activity after that. Spiders molt while laying on their back with their legs curled up. Be careful if you see your spider refusing food for a long time. If it has a sunken abdomen and is not active, it could also be due to any disease. Consult your nearest vet for an exact diagnosis.

After mating, feed the female Tarantula with a variety of live food more often. Once the small spiders emerge, you can feed the offspring with small-sized crickets or bugs and flies.

The Pink toe Tarantula is a rare and exquisite pet for your home. You will find yourself spending hours watching them in their enclosure. You need to prepare a proper housing and feed them once a while. They are hardly dangerous for humans and live a long life in captivity.

We hope that our guide on Pink Toe Tarantulas has given you the proper knowledge on how to keep them at your home. Do contact us with any queries and comments that you may have. All the best!