Mole Vs. Freckle: What’s The Difference? 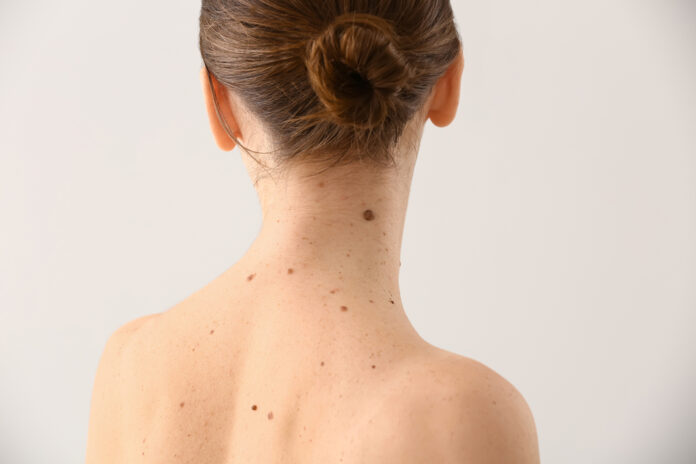 Often, we use the words moles and freckles interchangeably. Yet, these skin lesions differ from each other.

What Is A Mole?

A mole is a raised or flat skin lesion in your skin that comes in pigmented brown or black color. It can appear anywhere in the body, whether alone or in a group. It starts to show during childhood and adolescence, but adults can still grow some moles.

According to MayoClinic, moles may change in appearance or completely fade over time. Anyone can have more than 40 moles. Yet, checking these for any change in pigmentation or color is a must to rule out serious skin conditions.

Regular mole is a skin growth that has the following characteristics: a well-defined regular border, a size of a pencil eraser, and has the same color. Hair can also grow from a mole which is harmless most of the time.

This also known as an atypical mole because of its usual asymmetrical shape accompanied by irregular borders, multiple colors, and bigger than a pencil eraser. Unlike the regular type, most irregular moles are flat or almost flat. According to MedicineNet, if you have more than 25 irregular moles, you have an increased chance of melanoma (a skin cancer).

This type of mole is often called melanoma, which is a type of skin cancer caused by the mutation of pigment-producing cells that divide rapidly and out of control. It can be an existing mole that underwent change or a new mole growth. Cancerous moles are quite similar to the appearance of irregular moles, except that the symptoms are twice as visible as the latter. A cancerous mole is highly irregular, actively evolving and bigger than the other types of moles.

How Do You Develop Moles

A similar number, color, and shape of moles occur in individuals from different generations of family. Therefore, there is a tendency that moles are inherited. Nonetheless, there is no well-established study regarding the inheritance pattern.

Moles that did not emerge during childhood and adolescence are most likely caused by sun exposure. These moles usually occur in parts of the body that are exposed to ultraviolet (UV) radiation, and the longer you expose yourself to the sun, the more moles you may develop.

During pregnancy, moles tend to grow bigger and becoming darker due to hormonal changes. Fortunately, these changes are usually harmless. Moles in the face, thighs, breasts, and armpits are prone to changes.

What Is A Freckle?

Freckles are flat tan or light brown spots in the skin, and in areas that are frequently exposed to the sun. MedicineNet described that these are most common among red-headed and poorly pigmented people. What good about freckles is that you do not have to see them all the time because they tend to fade during winter.

Though freckles are less like to develop into skin cancer, keep an eye on the unusual appearance of freckles because it indicates an unusual skin condition.

If you are a person who does not care about UV rays then you are most likely to get this type of freckles. They may show up on your upper body such as the face and even at the back of your hand. Though anyone can have these freckles, ephelides commonly appear on people with lighter hair color and skin tones.

Unlike ephelides, these freckles usually occur in people who tan easily or have naturally dark skin. These are also called solar lentigines because it arises due to extended sun exposure and does not fade in winter. Lentigines are flat brown lesions, but in some cases, they may come up with a dry or slightly scaly surface.

How Do You Develop Freckles

Freckles like to run in families, especially those with fair skins. This happens because they have lesser melanin that protects the skin from sun damage.

Freckles are sometimes confused as a sign of sun damage to the skin, but there are not. It is a reaction of the skin when UV rays hit the skin, but can totally fade away when the cold season sets in. People with freckles are more sensitive to the sun compared.

Even though moles and freckles are commonly harmless and do not require treatment, some find it disturbing, especially when it appears on the visible parts of the face. The use of sunscreen is the number one prevention against forming new moles or freckles. However, if you decide to have them remove totally from your skin, you may consider the following:

Below are three of the removal process that can be done but only by a doctor:

Moles and freckles are both skin growth but differ from each other to some extent. While moles can develop into serious skin conditions such as cancer, most freckles do not. Moles are often raised but can also be flat like freckles. Freckles can also disappear during winter while moles stay throughout. Both are developed through genetic and sun exposure.

Because of technological advances, moles and freckles can already be removed or lightened. Nonetheless, if your mole or freckle does not do harm to your body, it is very much safer to let it be.

What is 153 Fahrenheit to Celsius

What is 152 Fahrenheit to Celsius