Jack Dempsey Fish: Everything You Need to Know 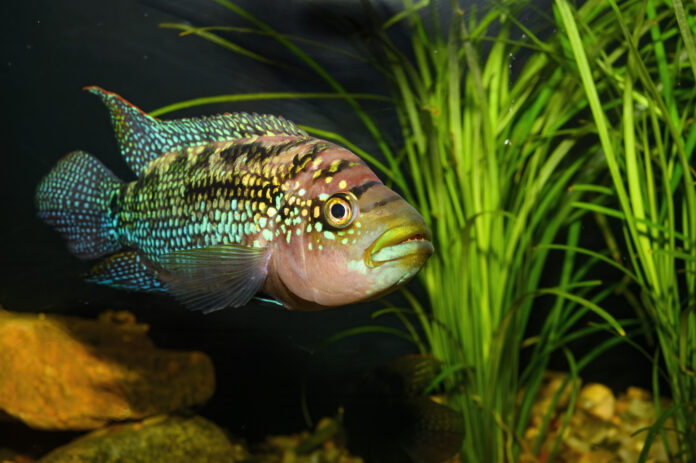 The Jack Dempsey fish is for those who love something wild, big, and colorful. You may have been keeping the smaller fish species before, but now it is time to check out something different.

The fish is a cichlid native; thus, you are likely to find it in freshwater streams and rivers too of countries such as Honduras, Guatemala, Belize, and Mexico. This should already help you know what to expect when setting up the best environment for your fish.

If so far you like what you are reading about the Jack Dempsey fish, keep reading as there is so much more to learn about the fish below.

The species is quite stunning to look at most of the time. It would generally make it easier for you to choose it from the first time you look at it.

As for the colors, the species would have the base color ranging from rosy pink up to almost black color. The species is also covered in green/blue metallic spangles that make the species eye-catching. These spots will reflect light and then flash brightly whenever the fish is swimming around to give off a great look generally.

When the fish gets older, its shine gets more pronounced. It might be why you get a lot more people going for the species as they like how it looks and shines.

The best part is that they grow into large fishes; thus, you can clearly see their bright colors even across the room.

Some might ask, how big will the Jack Dempsey fish get?

When in the wild, the fish can get up to 12 inches for males and 10 inches for females. As for those we keep in the aquarium, males grow up to 10 inches while females will grow up to 8 inches.

As you can see, such a size requires the need to have a large fish tank too. So, the next time you are coming up with habitat for the species, consider the overall size.

It is not just about the length; the fish is also thick. Since it is wider, it is expected that such a fish would have a higher bioload than a similarly sized fish in length but slimmer. This information might be important when you are choosing the best filtration system for the tank.

When setting up a tank, the question that would come to your mind would be, how much size would be enough for a Jack Dempsey fish?

You will need a big fish tank compared to what you would have used for other fish species. A single Jack Dempsey fish requires a tank of size 50 gallons. This is the bare minimum. You can always get a bigger tank.

For those that might want to keep a pair of fish species, 100gallons tank capacity is what you aim for in this case. Well, if you really want to come up with the best habitat for your fish, go ahead and invest in better and bigger tanks.

As part of setting up a Jack Dempsey fish habitat, there is a need to have the best filtration. This is because fish can constantly leave their waste in the water. This waste will eventually break down into ammonia, which would be unsafe for your fish. That is why you need a good filter that can clean the water in the fish tank.

Filters often have beneficial bacteria responsible for breaking down ammonia to leave the fish in a clean environment. Once the water has been filtered, it should smell nice, thus keeping the fish in clean water.

Since Jack Dempsey fish is a big fish species, you will need a larger filtration system. This is to ensure that the filter would be able to keep up with the waste that the fish generates in the tank.

The Jack Dempsey fish naturally lives in very warm climates such as Mexico or Honduras. For this reason, you will need a heater to keep the big guy feeling at home in your tank.

The size of the heater is vital. It is best to oversize rather than undersize the aquarium heater. This is because a small heater might struggle to maintain the water temperature within the desired range. Also, constant heating at the limits will generally shorten the life of the aquarium heater.

Check out various options in the market and compare their heating capacity before deciding.

Anyone who has owned a fish before would be thinking, setting up plants in the aquarium would make it look nice. However, that is not the case with the Jack Dempsey fish. Most owners have found the species to prefer the substrate over the plants.
So, if you are going to set up aquarium plants, do not put a lot of them in the tank. Try to be minimalistic.

Consider opting for either sand or gravel. This is when you are looking to set up the best substrate for the fish species.
A planted soil substrate is not recommended as this fish species love to dig. The result might mean ending up with a messy tank all the time.

Another thing many people would want to include in the fish tank is the best decoration. Well, Jack Dempsey fish species could use multiple décors in the fish tank. This is great to ensure that it has a place to hide too.

There is no doubt that your fish will appreciate having a roomy cave so that it can have a place to retreat to whenever it feels threatened.

There are times the species can outgrow the existing décor. So, make sure you update them after a while, especially when the fish is now fully grown.

Some people love to set up community fish tanks. These are tanks that would have multiple fish species in them to help with keeping more species at any given time.

Well, Jack Dempseys are not what you would call community fish species. They just don’t play nice with other species. This is because they tend to be territorial. To make it worse, this behavior increases as they become older.

Because of their size, the species can grow big to a size they can harass and potentially kill other small fish species.

Since they are territorial, you are likely to notice that the species would have a corner where it likes to retreat in case it feels threatened. It will still defend its position in case the other fish in the tank swims too close.

It will also be hard to keep two mature Jack Dempsey males in the same fish tank. This is because they are likely to fight a lot. Even if they are two of the opposite gender, the tank still has to be large so that each one has enough space to chill.

The only hope for having a Jack Dempsey community tank is having the same-sized species in the same tank. The other fish should also match in aggression levels too. Such options include firemouths, severums, and green terrors.

Well, your fish needs the best food too. For the Jack Dempsey fish case, it is best if you can use high-quality pelleted fish food. This is what you will mostly be feeding the fish.

A good example of the best food is the Omega One pellets for Cichlid. There is also the Fluval Bug Bites formula for Cichlids. These two food options come with a lot of protein good for your fish.

Since the pellets are designed to be fed on by such a fish, they would have the right size. This would make it easier for the adult fish to feed on the pellets.

You could still opt for the frozen foods to spruce the diet of your fish. Such include daphnia, brine shrimp, bloodworms, and black worms.

As for the feeding frequency, feeding your fish 1 to 2 times daily is good enough. This is for the adults. The younger fish could use two to three meals daily to ensure they grow faster and stronger.

No need to overfeed the fish. Just put enough food the fish would eat in 2 minutes. After that, remove the uneaten food.

Whenever a pair of fish species is ready to mate, the colors darken. However, there is the need to be cautious when the male is ready for mating, but the female is still yet to be ready. She might get harassed to the point of death sometimes.

The mating conditions also have to be near perfect to lead to the best spawning season. The water should be clean and within the recommended parameters. Also, the temperature should be higher to be a great trigger. Remember that the species love the warm climate.

The larger males will have an easy time seducing the females in most cases. Once they have mated, the female will lay up to 500 eggs. These eggs would then attach to nearby surfaces such as the substrate, aquarium walls, and decorations. The best part is that they hatch after three days.

The Jack Dempsey fish species is known for being protective of the fry. They would dig holes in the aquarium substrate so that the fry would be protected better. Both parents would take turns protecting their young ones until they are ready to easily swim independently.

You will also notice that the adult fish would crush the food to feed the young. This is done until they become old enough to feed themselves.

Poor environmental conditions can stress adults. This might lead to the adults feeding on the young. At this point, they will have to be separated. So, always ensure that your fish has the best environment to keep them healthy and care for the fry.

The Dempseys have a lifespan of 10 to 15 years. So, it is like having a long-term commitment to your fish when you opt for this fish type. It is likely to spend a decade or more in your home, so you would have to invest more to take good care of it.

If you love keeping fish as a hobby, this would be a nice fish to keep. It is big, fierce, and has many bright colors you will like looking at daily.

As much as it is a fun fish, it is still not for everyone.

One of the reasons is that it is a huge fish. You will still have to invest a lot more to set up a home for it. Also, it does not play nice with other fish species. Such aggression levels mean you might find it hard setting up a community tank.

As much as the fish might have some downsides, it is still a great species to keep. Take it upon yourself as a challenge, and start keeping a Jack Dempsey fish as your pet.