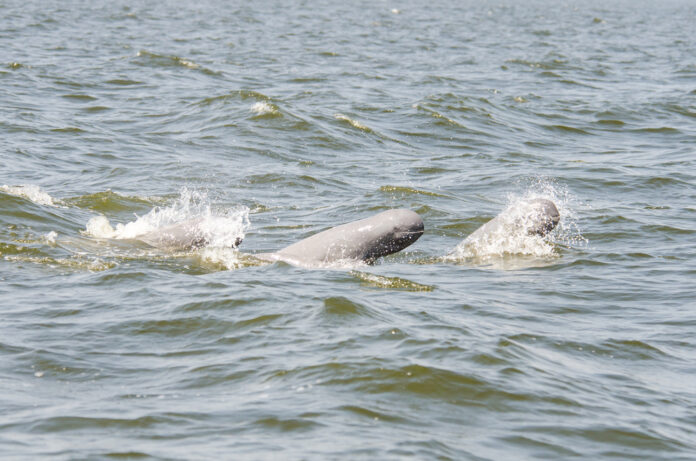 The Irrawaddy Dolphin, also known as the Mekong dolphin, inhabits Southeast Asia and South Asia’s coastal areas and river estuaries. These gentle marine mammals are believed to have been around for millions of years. During this time, they have evolved an amazing ability to survive in rivers highly impacted by human activity.

But despite their incredible resilience in surviving certain human pressures, the Irrawaddy Dolphin is still on the brink of extinction due to pollution, illegal fishing, damming projects, and other threats.

In this article, we look at how this unique species has adapted to its environment over millions of years and how it is being threatened today.

The Irrawaddy Dolphin is a medium-sized dolphin species typically measuring between 6 and 8 feet in length. They have a stocky body with a short beak and a rounded head.

Their dorsal fin is curved, and their flippers are relatively small compared to other dolphin species. The coloration of the Irrawaddy Dolphin varies from light to dark gray, with some individuals having a pinkish hue.

The Irrawaddy Dolphin is a social species that typically live in small groups of up to 10 individuals. They are known to be quite playful and often engage in activities like breaching, tail slapping, and spy hopping.

They are also known to bow, ride on boats and use their echolocation abilities to locate prey. In addition, they have been observed engaging in cooperative hunting with other species, such as the Ganges River Dolphin.

Adaptation is one of the defining elements of survival in the animal kingdom. Certain animals have adapted to fit their habitat, behavior, and diet to survive over time and the Irrawaddy dolphin is no different. Throughout its life, the dolphin has developed adaptations that have allowed it to survive and thrive in various environments. Let’s take a closer look at how the Irrawaddy dolphin has adapted throughout history.

The most noticeable physical attribute of an Irrawaddy dolphin is its curved lips which are perfect for feeding on small fish. In destinations where plankton is abundant, such as the coastal waters of Sri Lanka, these specialized hunting tools help it easily scoop up its delicious prey.

Its stumpy flippers are also well suited for maneuverability in tight or shallow locations, allowing it to make quick turns while hunting and avoiding predators in a hurry. Its streamlined body helps reduce drag when swimming through open waters too.

The Irrawaddy dolphin has an array of behavioral adaptations that help it survive and thrive within its various environments.

Firstly, they use an advanced echolocation technique to find food and navigate intricate underwater landscapes. They also use a logarithmic sweep frequency pattern which enables them to monitor the social behavior of their peers within their groups.

Moreover, these dolphins can form strong bonds with one another and use these close relationships as a basis for care when sick or injured – an example of altruism unique among cetaceans.

The Irrawaddy dolphins are highly adaptable creatures able to survive in fresh and saltwater environments. To do this, they have developed an array of adaptations that allow them to move seamlessly between these worlds. For instance, they have a thicker layer of fat under their skin than other dolphins, which helps them insulate themselves from extreme temperatures in either habitat.

The Irrawaddy Dolphin is an incredibly adaptable species when it comes to its diet. They are known to feed on a variety of small fish, crustaceans, and mollusks. In addition, they have been observed feeding on squid and octopus in some areas.

Their curved lips are perfectly suited for scooping up small prey from the seafl oor, and their echolocation abilities help them locate food in murky waters.

The Irrawaddy Dolphin is a highly social species that lives in small groups of up to 10 individuals. They are usually seen swimming close to the surface and often engage in play behavior such as breaching and tail-slapping. They feed mainly on fish, crustaceans, and mollusks, which they catch with their long beaks.

In addition to feeding, the Irraw addy dolphin also engages in social activities such as mating and caring for their young. They also migrate between different habitats for food or better living conditions.

The Irrawaddy dolphin is found in coastal and estuarine waters of the Indian Ocean, South East Asia, and Australia. They inhabit shallow waters near river mouths, estuaries, bays, lagoons, and mangrove swamps. They are also found in deeper offshore waters up to 200 meters deep.

These dolphins prefer warm tropical climates and can be seen in waters ranging from 18-30°C.

The Irrawaddy dolphin is an opportunistic feeder, meaning it will eat whatever is available in its environment. Its diet consists mainly of fish, crustaceans, and mollusks, which it catches with its long beak. It has also been known to consume small turtles and octopuses that pose no threat while staying away from bigger prey such as larger tortoises or sharks since these could prove dangerous for it in an unfamiliar environment where it could become easily disoriented or injured as a result.

The Irrawaddy dolphin has a lifespan of up to 40 years in the wild. They reach sexual maturity at around 8-10 years old and reproduce every 2-3 years. Females give birth to a single calf after a gestation period of 11 months. The newborns are about 1 meter long and weigh between 10-20 kg. The calves stay close to their mothers for up to two years, during which time they learn important skills such as hunting and socializing.

The Irrawaddy dolphin is found in coastal areas of the Indian Ocean, South East Asia, and Australia. They inhabit fresh and saltwater habitats, including estuaries, rivers, bays, and lagoons. They prefer shallow waters with plenty of vegetation where they can find food and shelter from predators.

The Irrawaddy dolphin is polygynous, meaning that males will mate with multiple females. Mating usually occurs during the wet season when food is abundant, and the water is warm. During this time, males will compete for access to females by displaying aggressive behavior, such as chasing and ramming each other. After mating, the female will give birth to a single calf after a gestation period of 11-12 months. The calf will stay with its mother for up to two years before becoming independent.

The Irrawaddy dolphin is classified as Orcaella brevirostris and is part of the family Delphinidae, which includes all oceanic dolphins. It is closely related to the killer whale (Orcinus orca) and the false killer whale (Pseudorca crassidens).

1. The Irrawaddy dolphin is the only oceanic dolphin species found in saltwater and freshwater habitats.

2. They are highly social animals, often seen in groups of up to 10 individuals.

3. They have a unique way of communicating with each other by making clicking noises and whistles.

4. The Irrawaddy dolphin has an elongated beak that it uses to catch its prey.

5. They are known to be very playful and can often be seen leaping out of the water or riding the bow waves of boats.

6. They are believed to have a strong sense of echolocation, which helps them find food and navigate murky waters.

7. The Irrawaddy dolphin is listed as endangered on the IUCN Red List due to threats from fishing, pollution, and habitat destruction.

1. Pollution: Pollution from industrial and agricultural activities is a major threat to the Irrawaddy dolphin. The pollutants can accumulate in their bodies, leading to health problems and even death.

2. Fishing: Bycatch from fishing nets is another major threat to the Irrawaddy dolphin, as they can become entangled and drown.

3. Habitat Destruction: The destruction of their natural habitats due to human activities such as coastal development and dredging can also harm the species.

4. Climate Change: The effects of climate change, such as rising sea levels and increased temperatures, can also be detrimental to the Irrawaddy dolphin’s survival.

To protect the Irrawaddy dolphin, conservation efforts have been put in place. These include creating protected areas and enforcing fishing regulations. Additionally, research is being conducted to better understand their behavior and ecology to develop more effective conservation strategies.

Education campaigns are also being used to raise awareness about the importance of protecting this species. Finally, organizations such as the World Wildlife Fund are working to reduce threats from fishing, pollution, and habitat destruction.

In addition to these efforts, the Irrawaddy dolphin is also being bred in captivity to increase its population. Captive breeding programs are helping to ensure that this species does not become extinct.

Furthermore, research is being conducted into the effects of climate change on the Irrawaddy dolphin and other marine species. This research will help us better understand how climate change impacts our oceans and what we can do to protect them.

To further protect the Irrawaddy dolphin, international agreements have been made. The Convention on Migratory Species (CMS) is an agreement between governments to conserve migratory species and their habitats.