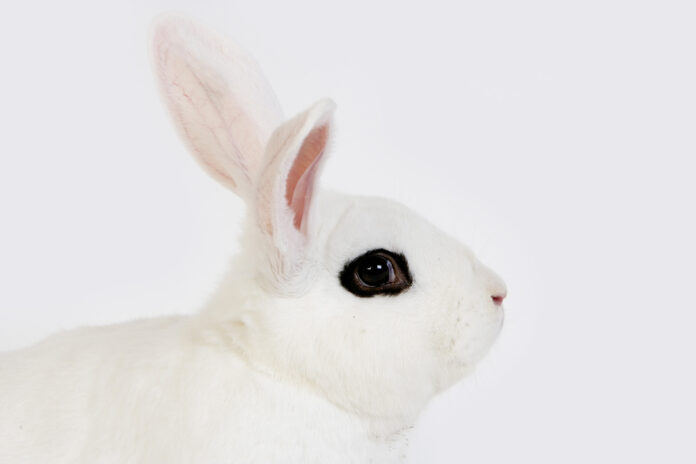 Are you an adult looking for a charming yet playful pet to liven up your home? Are you looking for a pet companion that will gladly take all your unlimited love and affection?

The Dwarf Hotot rabbit is one of the snuggest pets around. They’ve won hearts and admiration from all over the world due to their cute size and appearance.

Provided they receive proper feeding and a conducive surrounding, you’ll have nothing to worry about. Dwarf Hotots are practically independent and will always find something to keep themselves entertained with.

Dubbed the ‘Eye of the fancy’, this breed has both a distinctive and attractive coat. Their fur is white and has a striking black ring surrounding their eyes like an eyeliner.

Hailed as a great match for single or adults with kids, their care is not so demanding.

So, what else do these love balls have in store for us? Let’s find out below!

The Dwarf Hotot has quite an unbelievable story behind its origin. Narrating the whole bit would seem like a James Bond spy movie! Only that this time, we’d be all dealing in a secret trade of rabbits and not nuclear weapons.

It’s also recorded that the first Hotot was a development by Baroness Bernard in France in the early 20th century.

What we have now was eventually discovered from the efforts of two separate groups in the 1970s. The groups were from East and Western Germany and probably corresponded via secret mediums. (Given the existing restrictions during those times)

These two groups crossed completely differing breeds with hopes of getting what we now have. Their Eureka moment came when they crossed the Netherland Dwarf and the White Hotot (their best breeds) together!

Following this success, an enthusiast called Elizabeth Forstinger then brought 7 of these lovely wonders into California. Their adorable looks won the hearts of many and were finally introduced in shows in 1980.

Later in 1982, the American Dwarf Hotot Rabbit Club (ADHRC) came into existence. In the following year, the American Rabbit Breeder’s Association, or ARBA recognized the breed in a gazette.

Despite all that, ADHRC only allowed the popular black eye band breeds in shows. [1] It was only later in 2006 that ARBA also recognized the Dwarf Hotot with chocolate-brown bands.

As carried in the name, the Dwarf Hotot is a small rabbit that weighs between 2.5 – 3.5 pounds. For shows, however, the maximum adult weight accepted is 3lbs and nothing more.

The Dwarf Hotot has a compact body with a well-rounded head. Their body’s covered with shiny dense fur and has a barely visible neck.

Perhaps the most striking feature is their white roll-back coat and the majestic black band circling their eyes.

They also have rounded hindquarters that align with their characteristic wide shoulders. You’ll also spot their short and furry ears that may touch in some species.

Look at this summary representing the Dwarf Hotot:

The Dwarf Hotot has a characteristically dense, shiny coat. People refer to the coating as a roll-back because its hairs are vertically straight and don’t remain bent when stroked.

You won’t have to worry about the grooming as the bunnies do it well by themselves without human intervention.

However, when spring comes and it’s the molting season, you’ll have to intervene. If left unchecked, rabbits will eat their shed fur along with other treats in their cage. This can cause digestive problems in the long run which means a lot of pain and discomfort.

When you notice molting has begun, ensure that you brush their fur several times in a given week. This’ll prevent loose hair from littering your house and also getting ingested by the rabbit.

Use a gentle brush whenever you want to groom your rabbits to avoid bruising their skin.

As I stated earlier, the American Rabbit Breeder’s Association only admits specific standards for show. For this instance, varieties that have a white coat and the distinctive black band around their eyes. [2]

Such requirements shouldn’t bother you though if you only want a home companion. Leave the showbiz to the show rabbits.

You could keep your Dwarf Hotot with the brown patches and still experience the same happiness.

Caring for these adorable dwarf bunnies is nothing new from the regular approved care for rabbits. Throughout their stay, make sure that you give them a comfortable home and regular feeding. Above all, do not starve them off of attention because that’s what they live for.

Now, Dwarf Hotot rabbits feed well on hay just like other rabbits under captivity. This a go-to food source for most pet owners.

For the younger rabbits, you should give them more alfalfa hay. This is because alfalfa hay is very rich in calcium that’s required for healthy bone development. [3]

You may too, consider legume hay as an option for adult Dwarf Hotots. Legume hay plays an important role in easing digestion in adult rabbits. Nevertheless, you can still spruce this up with some recognized pellet feed. Rabbit pellets contain more minerals and vitamins that improve your rabbit’s health.

On the other hand, it is a good idea to make sure you only feed it with organic produce. Organic produce helps you avoid accidentally poisoning your pet with either herbicides or pesticides.

Note: You should also incorporate fruits and vegetables for a whole-rounded diet.

Ensure that there’s an unlimited supply of fresh water around for your little friends.

Pour the water into a shallow dish that has some weight to prevent it from toppling over during drinking. The dish must be a shallow one to allow your bunny to reach in with ease despite their short necks.

Alternatively, you may also use an inverted water bottle stationed at a separate point in the cage. Your bunny may have an easier time drinking from it compared to a dish.

You’ll see what works in the course of things and make your decision based on your findings.

Dwarf Hotots are a fairly easy breed to train even when still young. You can use the traditional task-and-reward method to teach your bunnies actions you’d want them to learn.

Even without my information, you’ll discover by yourself just how sociable these species are! They adapt very fast to their human owner and develop a strong bond in the end.

You’ll see proof when you come back to them after a while away; they joyfully hop all over your lap just to let you know how happy they are to see your face again.

Don’t we all want to feel loved? 🙂

Dwarf Hotots can sleep for up to 8-9 hours in a single day. This is in the evenings and while huddled together when you have more than 1.

Just like us, they show more activity and engagement during the day and rest at night. For that reason, you have to always serve them food in the morning when are still energetic.

You must change your rabbit’s bedding every once in a while to prevent an infestation of pests. This regular change also helps get rid of the shed-off fur that may mix up with your bunny’s food.

If taken in in great amounts, the hair can cause intestinal blockages that would be so brutal on their little tummies.

The Dwarf Hotot also exhibits a specific pattern in their reproduction.

Now, some female rabbits may start breeding immediately after they deliver. Others can begin shortly after. The newborns, on the other end, can also start mating in a matter of months.

Note: After the female has delivered her kits, it’s important you remove the feisty buck. The separation gives the new mom peace to nest her kit.

For example, your pet may suffer from malocclusion. This is a condition seen when the rabbit’s front teeth grow ABOVE the lower set teeth instead of IN FRONT of it. This condition may cause your pet to have difficulties when eating. If this happens, you might notice your rabbit pulling its teeth against its cage.

You can solve this by taking it to the vet to get its teeth filed. You can also give it things like wood and crunchy vegetables to help it carry out self-filing.

The other common disease is also known as scuffles. It’s an infection that attacks the respiratory tracts of rabbits. Symptoms include a tilting head, running nose, among others. Early diagnosis leads to fast treatment using antibiotics. [4]

Worth noting is that tilting heads in rabbits could also be an indicator of other problems. These include stroke, head trauma, brain tumor, etc. [5]

If you’re not looking forward to breeding the Dwarf Hotot, then you should consider neutering them.

You may start neutering the young bucks as early as 3 ½ months old. You can spay the Does at 4 months or older to minimize risk during operation.

These are one of the friendliest pets you’ll come across.

The Dwarf Hotot enjoys gentle back rubs while sitting on your lap. They also like it when you take them out of their cage for free roams around the house.

To avoid upsetting them, you can start acquainting them to human beings right from birth.

And as they enjoy staying happy, you can also take up my earlier advice and invest in rabbit-safe toys. These toys keep them both occupied and entertained when you’re not around.

Do not shy away from swinging to your local pet store and asking for the best toys available.

Among all the pet rabbits you can think of, the Dwarf Hotot ought to be at the top of your bucket list.

Imagine two of these sweet bunnies hopping around the house and all over your lap – fighting for your attention while at it.

As you’ve seen, their care is not labor-intensive. And they also don’t need much beyond feeding getting some fun playtime.