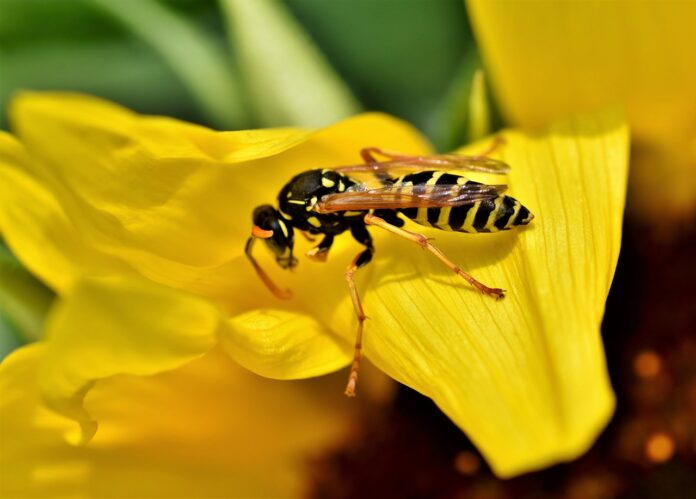 Mexican honey wasp is the general term but this species has sixteen sub-species. All these sub-species also make honey. Wasps can also pollinate but they do not do a perfect job like bees. This is because bees have a hairy body that traps pollen grains.

Yes, it is safe to consume wasp honey. Research shows that wasp honey has several health benefits. Although wasps produce little amounts of honey, this honey has high amounts of nutrients. You can pair wasp honey with various types of food. It can be a good source of energy in the morning when you spread it on bread or toast. It can also go well with cheese.

Where Do Mexican Honey Wasps Live?

This species of wasp build one of the biggest nests. Their nests range from 35cm to 50cm long. This nest can hold over 18,000 wasps. Mexican honey wasps use wood and dead insects to make a paste that builds their nests. Only the female worker wasps build the nests in the warm months of the year.

The nest also provides shelter for the young ones and the queen wasps. However, some honey wasps lay their eggs on plants outside the nest. It is because plant sap and juices are a good source of food for the young wasp.

How are Honey Wasps Organized?

Mexican honey wasps have an excellent system of leadership and work. The queens are the overall leaders and she is well protected by the soldier wasps. Soldier wasps can sting up to five times and don’t die. Something surprising is that only the female has the stinger. So you have to be extra careful around a honey wasps’ nest.

The queens run the nest and decide when to get other queens. When the queen wasps become too many, they move out with some worker wasps to start a new nest. The female wasps that cannot be fertilized become workers and work together with male workers. Worker wasps protect the nest and look for food for some queens and young ones.

A worker wasp can live from 14 to 22 days while the queens can live for 10 to 12 months. Worker wasps have a shorter lifespan because they fly around a lot hence losing a lot of energy. Worker wasps are also vulnerable to injuries.

Honey wasps also go through the four stages of life like most insects. Starting from egg, larva, pupa, and adult.

Most wasps die during winter because of the cold weather and inadequate food. The queens are always well protected in the nest during winter. The worker wasps have to look for food for the queens. A few males are also protected to help start a colony in the coming warm months.

Antioxidants in the wasp honey have a chemical compound called polyphenols. Polyphenols kill the free radicals in the body. Free radicals increase the rate of aging and contribute to chronic diseases like cancer. Take a teaspoon of wasp honey and your body will be free of dangerous toxins.

The research was done in North America on how wasp honey can help in wound treatment. And the conclusion was that wasp honey can kill germs. And still, help in tissue regeneration. Wasp honey will increase the rate of healing and reduce infections on the wound. It will keep the wound dry.

Wasp honey is 90% carbohydrates, which are an important source of energy your body requires. Apart from that, wasp honey has some proteins necessary for bodybuilding. Not forgetting the little number of minerals and vitamins that protect the body from diseases. Pair your diet with wasp honey and you will be a healthy human being.

5. Good for your heart

Wasp honey lowers blood pressure and controls blood fat levels. All in all, it controls the heartbeat and maintains body cells. All these ensure your heart remains healthy and strong for many years. Wasp honey is also better than regular sugar. Although it can also increase blood sugar levels, doctors recommend it for diabetic patients.

In general, wasps do not make honey. But the Mexican honey wasp is the only wasp species that can make some honey. Although they do not make it in large quantities like bees, you can harvest it for health benefits. Wasp honey has a lot of antioxidants and nutrients important for your body. Take a teaspoon of wasp honey and you will have a healthy heart.