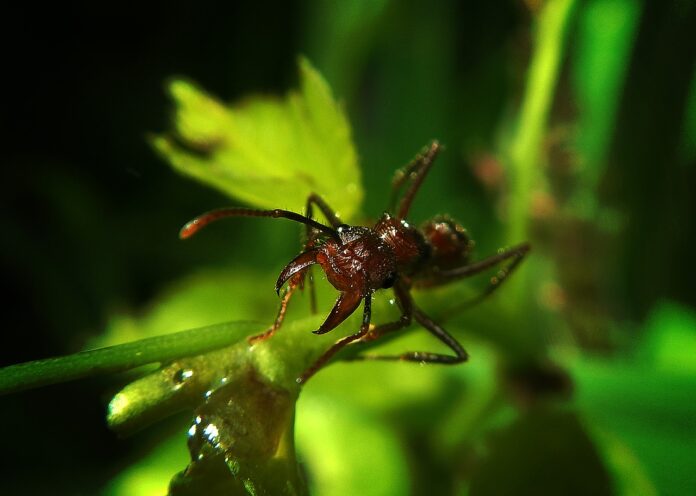 Dogs are friendly creatures. But they have strong, sharp teeth for a reason. Ants may not be as friendly as dogs (that’s why we don’t have them as pets), but they aren’t all out for war either! They have a way of defending themselves whenever they sense danger: biting.

Ants bite. But won’t do so unprovoked. Just like a friendly dog won’t mind using its teeth if a threat is suspected.

But should you be worried about an ant bite?

Perhaps you’ve been stung once or twice by one of those desperately tiny things, and you felt such a sharp, irritating pain, fearing something poisonous may have been injected into your system?

There’s no reason to be worried.

Generally speaking, ant bites are not dangerous, although I may not rule out allergic reactions in some cases. But overall, you are not under any serious threat from an ant bite. They are tiny things that only want to eat, live and build colonies in peace.

Oh, colonies! That’s why they’re strong. Ants are social animals. They work in groups and often form a formidable army. Because they’re small, you’re likely to run into them without realising it. And they have their way of alerting you to back off! Stings. And more stings. If you’re ready for war and are willing to take them on, it could take a while before they surrender.

But they know you’ll probably shake them off and walk away. Perfect defence mechanism! It seems unfair all the same. They could at least let out a sound to alert you of their presence. Or they do, and you don’t hear, because they’re so small! So they warn us with their jaws and their stings.

Let’s look at how these creatures fight back.

Do Ants Have Teeth?

Ants may look fragile and tiny, but they are not as feeble as they look. You’d be surprised to note that there’s not one close-up microscope image of a smiling ant. They always look dangerous. And angry. And battle-ready. Well, that’s not to make you afraid. It’s just such a hardened mien, a face we can put to their mischief!

So, do they have teeth? Or with what do they bite?

Yes, they do have teeth. But not the kind of dentition you’re familiar with. An ant’s “teeth” is basically an extension of the same exoskeleton that covers their outer bodies. But to be fair, if it looks like teeth, acts as teeth, and bites like teeth, maybe we should call it teeth!

Powered by strong jaws, ants’ teeth can penetrate many kinds of surfaces and the human skin is not exempted. With their teeth, ants can dismantle food, the carcass of larger animals, and even pieces of wood they need to build their mansions or colonies.

So ants have teeth, which are also strong. It may not be as fanciful as the teeth you’re familiar with, but they’re teeth all the same. Or, you can call them what they are: mandibles.

So why do ants use their teeth?

Why Do Ants Bite?

Ants do not readily use their mandibles (would refer to them as teeth henceforth), except when threatened. Just like every other living thing, a defence mechanism is an inborn trait. What no one tells the ants is that we, humans, rarely see them!

There’s a notorious exception, though. The fire ants, their name is enough warning. The fire ants are more aggressive in protecting their colonies and view any intruder moving too close as a serious threat. They bite and then sting, injecting venom into the victim as a warning to never dare them again. The bite is painful, although the stinging pain of the injection of venom is always more noticeable at the start.

Otherwise, unless physically threatened, most ants won’t bite. They are not always eager to use their teeth, as they have realised over time that was simply walking away from the much more powerful humans saves their lives.

But do all ants bite?

All ants can bite.

But not all ants would bite you. Not all ants bite. As said earlier, some ants prefer to simply walk away. When it’s time to break down food or building materials for their colonies, all ants will use their teeth. That doesn’t mean all ants bite to attack or defend. Notorious in this regard are the fire ants, leafcutter ants and carpenter ants. They bite to defend, bite to attack; in fact, they almost bite for everything!

There are indeed over 12,000 species of ants, and most of them defend and attack their territories differently.

But there’s a special group called the “army ants”. It comprises over 200 ant species which are specialise in attacking and making inroads into new territories. Their name suggests a lifestyle of warfare. They move in large numbers and are hardly stagnant. Because of their high mobility, they are more aggressive and tend to attack intruders more frequently.

How Dangerous Are Ant Bites?

Should you be worried about ant bites?

Except in extreme cases, ant bites should cause nothing more than an irritation.

Some ants have venoms that could be injurious to the body in allergic cases. In such cases, there could be swelling, itching or a burning sensation. If the body is not allergic to the toxin, it could end at that. However, in extreme cases, the symptoms could be worse than that. People who are allergic to any bites may develop conditions like nausea, and eventually, Anaphylaxis.

Anaphylaxis is an allergic reaction that can lead to fatality. Once you notice adverse reactions immediately after an ant bite, please do well to reach out to your doctor.

Fire ants can cause instant irritation, swelling and pain. But no more.

If you’re stung by a group of ants, probably after walking into them, you could experience more sharp pains that cause irritation that may last a couple of days.

Ant stings are often followed by an intense burning sensation, which is felt immediately after the sting. Next comes the itching, which may last few days. The pain naturally wears away on its own without any further adverse reactions.

Except you are allergic to ant bites or stings, you do not need to do anything after being bitten. Neither should you be worried that poison may have been injected into your bloodstream. Yes, fire ants have potent toxins that may affect the nervous system, but the effect is so mild that except you were attacked by quite a large number, you are not likely to feel the effect beyond irritation and mild swelling.

However, if you’re allergic to ant bites, never take them for granted. The best defence against being bitten would be to avoid ants completely. But if you are bitten, get medical help as quickly as possible.

A Bite or A Sting?

If you’ve observed, we’ve interchangeably used the terms bite and sting. So, what is the appropriate term to use? Dogs bite and don’t sting. Scorpions sting and don’t bite. What do ants do?

Ant does not just bite in the real sense. They pinch the skin through their strong mandibles and then release their venom into the hole they just drilled under the skin.

So, they bite and sting.

Humans are not under much of a threat from such venomous injections, but preys are not always that lucky. With their venom and string teeth, ants devour the prey, killing them if they are still alive. They bite to capture them, then inject the venom to paralyze them before either devouring or taking their food home.

Apart from fire ants and red ants, most ants are not generous with their bites or stings.

It is not possible to exhaust the entire types of Ants, but we can run through the most notorious and how they operate.

These little ants prefer to stay around the woods and the walls. They rarely bite, but when provoked, they attack and sting. Should you be worried about these types of ants? Not at all. They are too small, and their venom too little to have any effect at all. You could hold little black ants on your palm and hardly feel their bites. You don’t want them in your home, though. They are little but can bore through furniture, causing some damage.

Carpenters are destructive ants who make their home inside deadwood. They often leave sawdust in their wake and could be aggressive when attacking intruders. It is not clear why they are called carpenters, but maybe about the way they work on wood. Carpenter ants are very similar to termites in how they work, especially with wood. They bite and sting if you get too close to their abode.

The king of sting delivers a fiery sensation when they inject their poison into the body. Fire ants can cause allergic reactions when they sting, and they can be more dangerous in large numbers. They are mostly found in tropic areas and can be found in homes as well.

Odorous ants don’t bite. Neither do they sting. It seems they devised a better method to scare off enemies: a bad odour. They emit a stinking odour when they are either killed or stepped on. They are quite domestic and love to nib on leftovers from the kitchen. Beware of odorous ants around your food, as their powerful sense of smell makes them locate meals from even far away.

Pavement ants are typical ants. They can bite and sting but only do so when threatened. They are found close to windows and inside cracks. And they love to invade places where sweet things are, and you won’t be surprised to find them crowding a cube of sugar left unchecked.

You’ll hardly find leafcutter in your home, but they prefer to invade farms and gardens where leaves are a delicacy. Their mandibles devour as many parts of the leaves as possible, leaving them heavily perforated. If you want to get rid of them, you’ll have to be careful as they bite and sting deeply to defend their food source.

You know that ants bite and sting. But these little creatures mean no harm. If you let them be, they’ll never hurt you. If you attack them, they’ll attack you. Don’t underrate them, as they may be small in size, but together, in large numbers, they can cause pain. Remember, ants’ toxins can cause allergic reactions in extreme cases.

Do Jeans Shrink in The Dryer? Dry Jeans As an Expert

Do Jeans Shrink in The Dryer? Dry Jeans As an Expert

Effective Guide To Ethereum Trading This 2022

Dating a Chubby Girl: What You Should Know