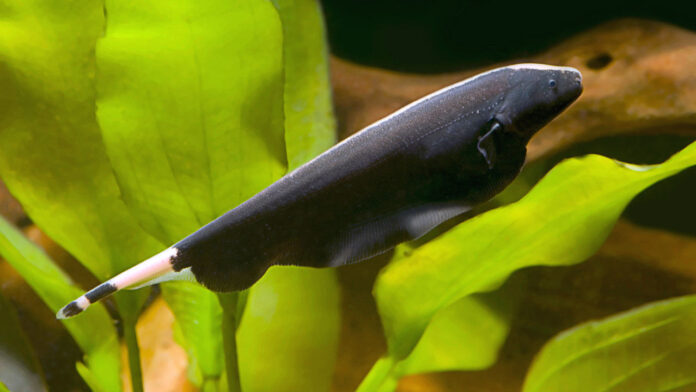 The black ghost knife fish is a common choice for those who want to experience keeping a fish that can generate electricity. As such, it is interesting to learn about its needs as a fish and how best to care for it in case you want to get one for yourself.

The fish is part of the Ghost Knifefish species, which has its origin in South American habitats. You can find it common in places such as Paraguay, Venezuela, and the Amazon Basin too.

The fish can be big, considering it may grow up to a size of 20 inches.

This fish species features a matte black color for its body. However, some might have white stripes extending from the nose to the back. There can be other white stripes on different parts of the body.

This fish species is nocturnal. This means that it is mostly active during the night and rests during the day.

Considering their eyesight is not the best, they commonly hunt and communicate by using an electric field.

This fish species is also quite shy and not the most social species you can keep. It is why they prefer keeping it to themselves. They can sometimes get aggressive if you keep them with other knife fish species in the same tank.

It may also take more time for the fish to settle in a new environment. However, once they get used to the environment, they would come out at night to enjoy a swim and eat. You will find them swimming around foliage and substrate.

Before you can set up the best environment for a black ghost knife fish, it is recommended you understand its natural habitat. It is from there; you can pick the best ways to improve the overall tank set up to make it comfortable.

This fish species likes swift-flowing rivers. It also loves to migrate into the flooded forests when it is the rainy season. As you can see, the fish will love habitats with heavy plantations. This provides it with enough hiding spots.

The natural environment for this fish is dark and the fish also has poor vision. It is why the fish has evolved to a point it can generate low-voltage electricity to act as a radar system. With this capability, the fish can now easily navigate even through the murky waters.

The ability to generate electricity makes it possible for the fish to hunt and communicate with similar fish types.

The fish mostly preys on crustaceans, insect larvae, worms, small fish, and more in its natural habitat. You may also have to look for food that can supplement the fish nutrition better while in the tank.

The minimum tank size recommended for a black ghost knife fish is at least 100 gallons. This is because it is a large fish species, and it will need a large fish tank to accommodate it better.

When you keep such a large fish in a small tank, you will find that it will increase its aggression. Also, its health might suffer. As a result, you should consider getting the correct fish tank size.

Even if you use the best water quality, but the fish tank is still small, it will not work great for your fish.

The 100-gallon tank is suited for only one black ghost knife fish. If you want to keep more fish in the same tank, consider adding 80 to 100 gallons for each extra fish you want to add. Having more space is vital to keep the fish from showing aggression towards each other. There will be enough space for each one to enjoy its own territory.

Water quality is very crucial when setting up the tank. This is because black ghost knife fish is sensitive to water changes. It is for this reason; you need to use a high-quality filtration system to ensure that the water conditions do not change a lot.

You are also advised not to change all the water in the tank. You can change only 30 to 50% of the water weekly, mostly depending on the bioload in the aquarium. Consider testing the water weekly to ensure that ammonia and nitrate levels are not too high.

Having a UV sterilizer as part of the setup is also vital. The work of this sterilizer is to kill possible diseases that might harm your fish.

Make sure that you also provide a lot of thick planting in the tank. You could also include more rocks and driftwood to ensure that the fish has plenty of room to hide or live in the plantations.

The water parameters for this fish can be flexible, unlike other species. However, you still have to consider keeping them within the recommended ranges.

Starting with the water temperature, the black ghost knife fish needs a water temperature from 73 to 80 degrees F. As for the pH levels, it is from 6.5 to 8, and water hardness from 0 to 10 KH. So, each time you are setting up your fish habitat, always keep these parameters in mind.

It is not just the water quality but also the other parameters. Try to maintain them as recommended.

The black ghost knife fish likes to feed on what it would eat while in the wild. As such, you can expect that it might not be easy to transition the fish over to eating pellet or flake foods. It is for this reason you should consider feeding it with what it likes.

The food should be rich in protein and still natural. Consider options such as live or frozen foods that will make the fish enjoy its meal times. You are now likely to feed it with bloodworms, brine shrimp, prawns, and tubifex.

Since the black ghost knife fish is nocturnal, it is best to work with their sleep cycles. Most people would feed the fish once a day or in the evening. It all depends on your schedule.

When you just first get the fish, do not overfeed it. This is because the fish can easily eat all the food that you give it. It would then be best to reduce the quantity to avoid making your fish obese.

Overfeeding will also lead to extra fish waste in the tank in addition to making the fish sick. So, you will have to keep on checking the water quality to see when it is time for a change.

You may also consider setting up a community of fish in your tank. For this reason, you need to consider what would be great to pair with a black ghost knife fish.

So long as the other fish type is peaceful, you will find that the two can coexist peacefully all the time. Some of the options I recommended include bichir, rope fish, Oscar fish, cory catfish, and silver dollar fish.

Well, there are many other tankmates you could try, but those mentioned above would be a nice start for you.

The problem in most cases is space. You need a lot of space to breed the species. As such, simply get yourself a grown black ghost knife fish from your local pet store to start rearing it.

Many people who love keeping fish would always want to try it out. They know that it is different from what they get with the common fish species. Also, the electricity generating ability would make some want to see it in action. Well, the fish is a bit shy, but you may catch it in action from time to time. Nevertheless, it is a great fish choice for most people.