50 Best Military TV Shows That Are Worth Watching 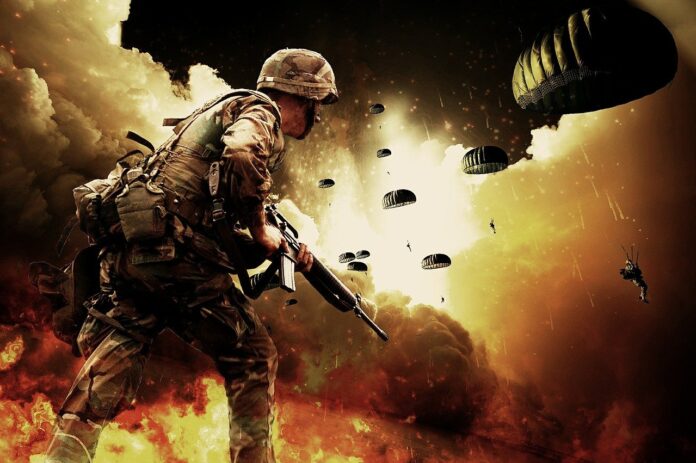 What kind of TV show would you want to watch if you were a soldier or a war veteran? Military TV shows are some of the most entertaining ones out there. They give us a glimpse into the lives of our brave soldiers and their families.

The Last Ship is set in 2027 when an alien virus wiped out almost all life on Earth. Humanity has been forced underground where they live in bunkers and try to survive.

But after years of living like this, people are starting to lose hope. People have become desperate and dangerous. A crew of hardened veterans must risk it all by going back up above ground to deliver supplies.

This series follows three US Army Rangers as they serve during Operation Iraqi Freedom. It gives us a look at what it was like to be deployed in Iraq.

Combat Hospital takes place in Afghanistan and follows the staff of a combat hospital. It highlights the dangers that these medical professionals face on a daily basis.

Lone Star tells the story of two brothers who join the Texas Rangers. We follow them through their training and see how hard it can be to balance family with work.

Black Hawk Down is about a group of American soldiers sent to Somalia to capture a man who helped Al Qaeda plan 9/11. But things go wrong and they get trapped.

Band of Brothers is one of the greatest war movies ever made. It documents the true stories of Easy Company, 506th Regiment, 101st Airborne Division during World War II.

Full Metal Jacket is a movie directed by Stanley Kubrick about Private Joker, a young recruit in the United States Marine Corps. He goes through boot camp and basic training but then gets shipped off to Vietnam.

Apocalypse Now is a 1979 epic film written and directed by Francis Ford Coppola. Based on Joseph Conrad s novel Heart of Darkness, the film focuses on Captain Willard, a fictional character played by Marlon Brando, a U.S. Navy officer assigned to track down and kill renegade Colonel Kurtz, portrayed by Meryl Streep.

Restrepo is a 2011 documentary film directed by Tim Hetherington and Sebastian Junger. It chronicles the lives of members of Bravo Company, 3rd Battalion, 75th Ranger Regiment, stationed high in the Korengal Valley in eastern Afghanistan.

Behind Enemy Lines: Colombia is a 2006 American television documentary miniseries that explores drug trafficking operations run from within the ranks of the Colombian military. The program was produced by the Sundance Channel in association with the Sundance Institute and IFC Films, and aired on the Sundance Channel and IFC simultaneously on January 23, 2007.

The Men Who Stare At Goatshas been described as “a darkly comic thriller” and “an absurdist comedy”. It was filmed over six months in Iceland and Morocco.

Saving Face is a 2010 American crime drama film directed by Zhang Yimou, starring Gong Li, Matt Damon, and Edward Norton. It is based on the real-life story of Chen Guangcheng, a blind activist who escaped house arrest in China in 2009 before being granted asylum in the United States.

Black Hawk Down is a 2001 epic war film set in Mogadishu, Somalia, during Operation Gothic Serpent. The film tells the story of a joint force of US Army Rangers and Somali militia attempting to seize the city from Al-Qaeda forces.

The Thin Red Line is a 1998 epic war film directed by Terrence Malick. Based on the 1962 novel of the same name by James Jones, the film focuses on three infantry companies serving under different commanders during their time in combat against Japanese soldiers near Guadalcanal in 1942.

Flags of our Fathers is a 2006 epic war film directed by Clint Eastwood. It is based on James Bradley’s nonfiction book Flags of Our Fathers, which chronicles the stories of four men involved in raising the flag over Iwo Jima during the Battle of Iwo Jima.

Letters From Iwo Jimai 2016 war documentary directed by Joe Berlinger. The film follows two brothers, both veterans of the U.S. Marines, as they search for answers about their brother’s death while fighting in the Battle of Iwo jima in 1945.

Saving Private Ryan is a 1998 war film directed by Steven Spielberg. Based on Tom Hanks’ 1997 bestseller of the same title, the film follows a group of paratroopers from Easy Company, 501st PIR, 82nd Airborne Division, who are tasked with rescuing members of the 3rd Battalion, 7th Infantry Regiment, 1st Infantry Division who have been taken prisoner during the invasion of Normandy.

The Hurt Locker is a 2008 American drama film directed by Kathryn Bigelow and written by Mark Boal. A bomb disposal expert (Mark Wahlberg) goes through an intense eight-week training program to become a member of the Explosive Ordnance Disposal Unit 2 (EOD).

The Pacific is a 2010 historical war film directed by Jonathan Teplitzky and written by Max Brooks. The film depicts the events surrounding the Battle of Guadalcanal in 1942–43.

The Thin Red Line is a 1998 epic war film directed by Terrence Malick and written by Joel and Ethan Coen. Set during the First World War, it tells the story of a unit of the United States 32nd Infantry Regiment which fights its way across the island of Guadalcanal.

Letters from Iwo Jima is a 2016 documentary film directed by Clint Eastwood and written by Robert Stone. The film documents the letters home of five US Marines serving on the Japanese island of Iwo Jima during the final months of the war.

Saving Private Ryan is a 1998 war film directed by Steven Spielberg and written by George Lucas, Tony Kushner, and Stephen Schiff. Based on Tom Hanks’s 1997 book with the same name, the film follows a group of men of the U.S. 1st Infantry Division as they fight their way across France and Germany towards the beaches of Normandy, France, at the end of June 1944.

Flags of Our Fathers is a 2006 war film directed by Ron Howard and written by Michael Bortman. The film chronicles the stories of two brothers: Joe Rosenthal (Adrian Grenier), a photographer for the Associated Press, and Eugene de Rochemback (Brendan Gleeson), a French Canadian soldier in the 3rd Battalion, The Calgary Highlanders. They are commissioned to photograph the raising of the flag over Mount Suribachi on 7 February 1945.

Black Hawk Down is a 2001 war film directed by Ridley Scott and written by Mark Boal. Starring Josh Hartnett, Ewan McGregor, Colin Farrell, Sam Shepard, Abbie Cornish, and Richard Jenkins, the film is about the 1993 Battle of Mogadishu in Somalia.

Platoon is a 1986 drama film directed by Oliver Stone and written by Stone and Ronald Bass. The film focuses on the lives of four soldiers in the Vietnam War.

The Longest Day is a 1962 British-American war film directed by Richard Lester and produced by David Picker. The film was nominated for three Academy Awards, including Best Picture, and won the Golden Globe Award for Best Motion Picture – Drama. It portrays the Allied invasion of German-occupied Europe in the Second World War.

Band of Brothers is a 2001 HBO television miniseries based on the memoirs of Easy Company, 506th Regiment Combat Team. The series was developed for television by Steven Spielberg, who also served as executive producer along with Tom Hanks, Gary Goetzman, and John Milius.

The Pacific is a 2018 American epic historical war film directed by Peter Berg and written by Aaron L. Gilbert. The film depicts the experiences of the men of the Imperial Japanese Navy’s 4th Air Fleet during the last year of the Pacific Theater of Operations in World War II.

Letters Home is a 1945 American short documentary film that was made by the United States Army Signal Corps as part of its wartime propaganda effort. The film consists of footage shot by members of the United States Armed Forces in North Africa and Italy, and shows servicemen writing home to their families.

Full Metal Jacket is a 1987 war film directed by Stanley Kubrick and written by Kubrick and Gustav Hasford. Based upon Hasford’s novel of the same name, it tells the story of Marine Pvt. Joker (Matthew Modine) and his training at Parris Island, South Carolina.

Flags of Our Fathers is a 2006 war film written and directed by Clint Eastwood and starring Adam Sandler, Tim Robbins, Tommy Lee Jones, Rob Schneider, Kevin Bacon, Joshua Jackson, and Ioan Gruffudd. The film follows two World War II veterans, one a Jewish American soldier from Brooklyn named Joe Rosenthal (Robbins), and the other a Midwestern Protestant named James Bradley (Jones), as they search for the flag held by Joe Rosenthal’s son after he dies in combat.

The Thin Red Line is a 1999 war drama film directed by Terrence Malick and written by Eric Roth. It is based on Ernest Hemingway’s semi-autobiographical novel of the same name (1926). Starring Sean Penn, Nick Nolte, Woody Harrelson, Wes Studi, Willem Dafoe, Elias Koteas, Harry Dean Stanton, Joel Edgerton, John C. Reilly, and Forest Whitaker, the film tells the story of three soldiers who are sent into battle against the Japanese in the Philippines during World War II.

The Hurt Locker is a 2008 American war film directed by Kathryn Bigelow and written by Mark Boal. It is based on the memoir of the same name by former bomb disposal expert Sergeant First Class William A. Eubank Jr., who worked with the 1st Special Explosives Detachment (1st EXD) under the command of Lieutenant Colonel Timothy J. McVeigh.

Lights Out! is a 2007 war film about the Battle of Iwo Jima, directed by Clint Eastwood. The film stars Channing Tatum as Private First Class Rene Gagnon, a member of Company F, 2nd Battalion, 26th Marines, USMC, who was awarded the Medal of Honor for actions on February 19, 1945.

Band of Brothers is a 2001 HBO television miniseries that dramatizes the true stories of Easy Company, 506th Regiment, 101st Airborne Division, which fought in Operation Market Garden, the Battle of the Bulge, and the Western Allied invasion of Germany at the end of World War II. The series consists of six hourlong episodes, each focusing on the life of a different company commander.

Full Metal Jacket is a 1987 American war film directed by Stanley Kubrick and written by Kubrick, Matthew Robbins, and Michael Herr. Based upon the 1968 book of the same name by Gustav Hasford, it follows Marine Pvt. Joker (R. Lee Ermey), who has been assigned to kill drill instructor Sgt. Hartman (Vincent D’Onofrio).