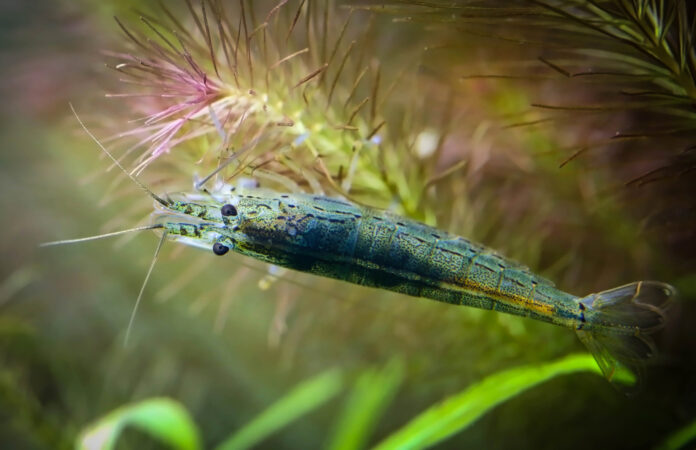 By reading this article, you will learn about bamboo shrimp’s behavior. Besides that, I will also discuss its appearance, diet, and how to take care of it. If you plan to add bamboo shrimp to your aquarium. Getting to know this filter-feeding shrimp better is your first step.

What Is Bamboo Shrimp?

Bamboo shrimp is also known by its scientific name atyopsis moluccensis. Most people also call it with the names wood shrimp, Singapore flower shrimp, the fan shrimp, or Singapore shrimp.

This filter-feeding shrimp belongs to the Atyopsis (formerly Atya) family. It has only one other species, Atya spinipes. You can’t find much information on either species. Their natural range is also still very restricted without external influence.

Learn more about this freshwater species below:

Generally, bamboo shrimp features red and brown undertones. Their appearance is emphasized with white stripes on their back. They mostly change colors according to their mood. Also, their surroundings, and health, which is interesting.

These freshwater shrimp shows red coloration when they are comfortable with their environment. Although, there are some cases when they turn vibrant cerulean blue.

What most people find recognizable about bamboo shrimps are their “fans.” These fans are attached to their hands, and they use this body feature to filter through the water to find food.

The moment they put their fans to their mouth and stop waving their hands, you will know when they caught food. Watching these beautiful bamboo shrimp can be mesmerizing, especially their behavior when feeding.

What is interesting about these beauties is that they come in many varying color types. At first, people thought that there were different bamboo shrimp species. It is because of their different colors. But researchers found out that there is only a single species in recent years.

Just like other shrimp species, bamboo shrimp lives peacefully. They are not aggressive too. They are not territorial freshwater creatures. In fact, they get along well with other species such as fish, other shrimp, snails, and many more.
Aside from that, they usually enjoy being with other kinds. It shows when they often come in a group during their everyday activities such as feeding. They do not show any sign of irritation or aggression when they group with others.

Bamboo shrimp are active, and they move around the tank most of the day. Also, their main priority is feeding. So expect to often see them put their fans on their mouths, indicating they caught a meal.

When you observe that your bamboo shrimp doesn’t move much and is listless, it might indicate that it is sick.

Another interesting behavior of these freshwater species is molting. It only happens around every other month. Its process starts when a shrimp is looking for a hiding place. One to two days of hiding will pass then the bamboo shrimp will molt when it is sure to be safe.

Afterward, it will emerge from its old shell, leave the shell, or be removed. You don’t have to remove the left shell out from the aquarium because other tank inhabitants will eat them.

Bamboo shrimp grow from two to three inches long. In some cases, they grow up to 4 inches, allowing them to be the largest freshwater aquarium shrimp.

Aside from that, bamboo shrimp is significantly larger compared to dwarf shrimp. So, if you plan to breed these filter-feeding species. Remember that female bamboo shrimp are larger than males. They also have smaller front legs.

You can also improve the size of your bamboo shrimp by maintaining a balanced diet. Feed them healthy food. Good water quality also impacts the shrimp’s growth.

Getting them at the youngest age possible will let you avoid uncertainties. Those uncertainties about the care they received from the breeder. It is also best to buy from a reputable shop to ensure the quality of the bamboo shrimp.

Like any other shrimp, bamboo shrimp don’t last long, and they only live for a few months, or one to two years. With proper water conditions, these freshwater species might last longer than that. But, this would be a rare case.

Always remember that it is not common for them to die during the first week or month of being placed in a new tank. So, if this happens to your bamboo shrimp, check out the water in the aquarium if it has the right parameters.

If you want a low-maintenance shrimp, bamboo shrimp is your best choice. In fact, pretty much anyone can take care of these freshwater species.

Bamboo shrimp does not have any unique or complicated requirements. You only have to be consistent and provide them the best place to live.

But it is important that even a small change in the water parameters can significantly affect your bamboo shrimp condition. So, make sure to double-check the tank’s water condition before placing the shrimp.

Bamboo shrimp belongs to the detritivore category. It is according to gut content analysis and direct underwater.

A detritivore is a living thing that mainly eats drifting detrital particles. They use the cheliped setae to filter the water column.

In the case of bamboo shrimps, they use their “fans” to filter small organisms. They also use it to get algae and organic detritus. When they caught some, they put it to their mouth to eat it.

Bamboo shrimp feeding in the aquarium

Since bamboo shrimp cannot eat shrimp pellets or the likes. You have to give them powdered food to survive. As filter feeders, bamboo shrimp need smaller food particles. Those that keep floating in the water.

Among other food options that you can feed them includes micro-worms and pond plankton. Also, finely ground food flakes, spirulina powder, crushed food tables, and many more.

Also, take note that almond or oak leaves provide many health benefits to bamboo shrimp. But unlike dwarf shrimp, they are not able to consume these leaves directly. What benefits them is the substances excreted by these leaves that improve water parameters and allow easier molting.

When feeding bamboo shrimp that lives in a community tank along with fish, you have to be careful. Bamboo shrimp are non-aggressive species, and they are definitely not afraid of fish.

But the problem is, feeding them with a little bit larger food particles might attract fish. When they do, they might bite your bamboo shrimp accidentally. It’s essential to give them food at night or else the fish will eat most of the food.

Bamboo shrimp living alone in an aquarium is not fun. It is better to watch it interact with other freshwater creatures. The natural behavior of bamboo shrimp is that they don’t cause any trouble. In fact, they spend time minding their own business in the tank, finding food.

Knowing this, you may want to look for compatible tank mates for them. Those that would live peacefully with your bamboo shrimp. Those with a peaceful nature and non-predatory. It is because a fish that see bamboo shrimp as food would spell a disaster.

Here are some of the best species that can live peacefully with your bamboo shrimp in a fish tank:

There are two common health issues you should watch out for in your bamboo shrimp. One of those is their water sensitivity. If the water in the tank has wrong water parameters or any slight change in the water can be fatal for bamboo shrimps.

It is the reason why you have to be careful when changing the tank’s water. Otherwise, your bamboo shrimp will be in trouble. You should also remember this when introducing it to a new tank. Help your bamboo shrimp to get used to its new home gradually.

Copper causes the other health detriment that bamboo shrimp might experience. Like any other shrimp, even the slightest exposure to copper in the tank water can kill bamboo shrimp.

Since the vast majority of aquarium medications have copper in them, this could be a huge problem. If you do not learn this earlier, you might try to help another species in your tank, not knowing that it can poison your bamboo shrimp.

In case you really need to put the medication, remove the bamboo shrimp first before adding the medication, then place them in a new tank. Make sure that their new home has the same water parameter as where they came from.

Yes, you can breed bamboo shrimp at home but make sure that you are in for a challenge before doing so. Just like Amano shrimp, small adult bamboo shrimp don’t hatch. They undergo a larval stage instead that requires brackish water for them to thrive.

You need to transfer bamboo shrimp larvae to brackish water immediately after hatching. The water should contain 33 to 34 grams of salt every one liter where the larvae would stay until they grow into adult bamboo shrimp. When you neglect to transfer the larvae quickly from the tank, other fish might eat them.

After the incubation phase, the bamboo shrimp fry should return to the freshwater. Now, you have learned that breeding bamboo shrimp require effort, time, and precision. Besides, most bamboo shrimp sold in aquarium stores are caught in the wild.

What Size Aquarium Do They Need?

The best tank size for bamboo shrimp is about 20 gallons for each shrimp. It means you need at least a 60 gallons fish tank when housing three bamboo shrimps. Some might ignore this tip. But I highly recommend that you follow this measurement to keep your shrimp in good condition.

The main reason why I recommend a 20 gallons per shrimp fish tank size is that bamboo shrimp is bigger than most shrimp. For this reason, they require more space to find food. It is also true for most aquatic life that a bigger tank is better than a small one.

It is also best to get a long tank than a deep one. The reason is that this structure does an excellent job of facilitating an ideal current for bamboo shrimp feeding.

How Many Can Be Kept Per Gallon?

In relation to the previous question, how many bamboo shrimp should you keep per gallon of water? The answer is 1 per 20 gallons. Bamboo shrimp can thrive better when they have enough space for scavenging. It is since scavenging is what they do the most time of the day.

To summarize, bamboo shrimp are a fascinating filter-feeding species. They spend most of their day filtering algae and plankton. They also filter any other possible food source from the water.

Bamboo shrimps also come in different colors that are mesmerizing to watch all day long. It is especially when they interact with other fish.

If you find bamboo shrimp interesting, I hope that this article guides you. It will help you to properly take care of them when you decide to add some to your fish tank. Make sure that the existing fish in your aquarium are not natural predators of bamboo shrimp.